By Mitul Gandhi, November 8, 2021 , in SEO Strategy and SEO Research and SEO Reporting and SEO

Worried about Google rewriting your titles?

~65%. That’s the percentage of web page titles my research shows as rewritten by Google since September.

To put it into perspective, that's a nearly 3x increase relative to the results of the same analysis I conducted a year ago.

This is not just Google shortening long titles with an ellipsis (I specifically excluded those cases). The research looked at every instance where Google changed the title vs. what was found on the page itself.

Why should SEO's care? Whether you are running click-through rate tests or simply trying to better match searcher intent – there is a 65% chance you’re drawing the wrong conclusions from your data.

So, What Are SEOs to Do?

I am a firm believer in controlling one’s own destiny. As much as Google’s intentions may be good, ceding control over what is displayed for my pages is not something I am comfortable with – I’m guessing you are not either.

Dr. Pete has written an excellent post outlining the different types of rewrites. Combined with the observations from my title rewrite analysis last year, there is enough written on WHAT and HOW rewrites happen.

The question I wanted to answer was whether the data showed patterns on WHY and WHEN this was happening – and if it could lead to some direction on things we could take action on.

To answer this, I dug into data on the Top 5 ranking URLs across 1 million keywords.

Since seoClarity crawls a TON of data, it was easy to get both the SERP titles and also the actual titles on the page (also available to all clients from the UI directly). More on the data and methodology at the end of this study.

NOTE: This is a large-scale analysis. As a result the findings are an average across a broad swath of industries and keywords. Use this analysis as a benchmark and run your own title rewrite analysis to understand how this impacts you.

This was true last year, and it's still true today.

Titles between 11 and 60 characters have a significantly lower chance of being rewritten than those under or above that threshold. 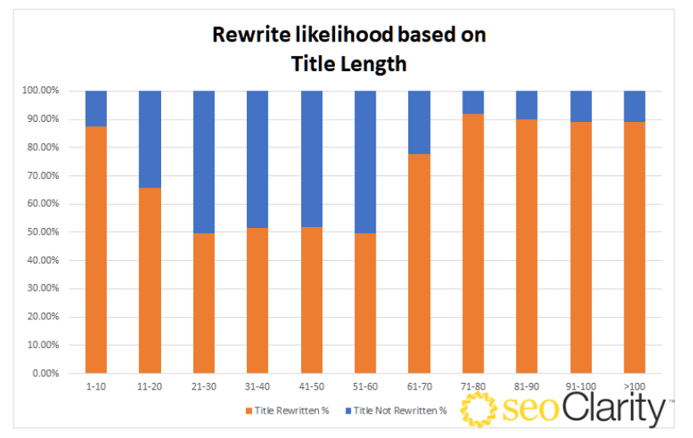 Below is the same chart from last year – note how rewrite percentages have increased across the board but the pattern is identical. 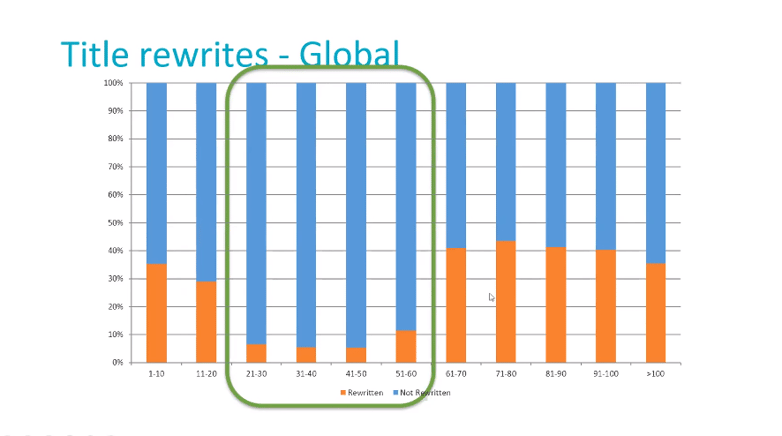 Takeaway: Running a CTR test? Stay within 20 to 60 character titles to reduce the chance of rewrites.

#2. Truncated titles are rewritten too

I had a chance to dig into truncated titles in this analysis. Not surprisingly, titles that are truncated are also rewritten.

While we excluded truncated titles in this analysis, adding those cases where the titles were truncated AND rewritten would move the percentage of rewrite up above the 70% mark.

Takeaway: Keep the most important message in your title within the first 70 characters.

#3. Certain words (and characters) can act as triggers

Many rewrites are minor adjustments of the title, where certain words or characters are simply dropped.

I found this especially true in the case of the following words and characters where the likelihood of this type of rewrite was over 90%.

Takeaway: Consider replacing "generic" words from titles to differentiate them, and when it comes to emojis – test, test, and test. Tactics that don't add value for end users may have short lived benefits.

#4. Rank position makes a difference – but only for position 1

There was no significant difference in the title rewrites between positions 2 through 5.

Takeaway: Web pages in position 1 may be either doing more things right as outlined above (which is not always the case as any SEO can attest) or Google may be granting them some leniency.

Regardless, run the analysis for your own web pages in position 1 vs. other positions to confirm. Take it up another notch and run it for your competitors.

There are multiple types of of rewrites.

At a higher level, title rewrites appear to target a few end goals:

#6. Title rewrites are not a new issue – and are not going away

I wrote about conducting a page title rewrite analysis just a little over a year ago, noting how the incidents of rewrites were growing.

Title rewrites are not going away. If you want to control your destiny, you will need to conduct this same analysis and determine when and why Google rewrites titles and build your own strategy for how to overcome it.

seoClarity clients can research, analyze, and uncover the impact of title rewrites with a couple of clicks.

1. Actionable Insights already has a built-in insight to highlight each title and meta rewrite. It essentially runs the analysis for you.

2. Rank Intelligence provides you the raw SERP title and meta downloads for both your own domain and also any competitor domain. 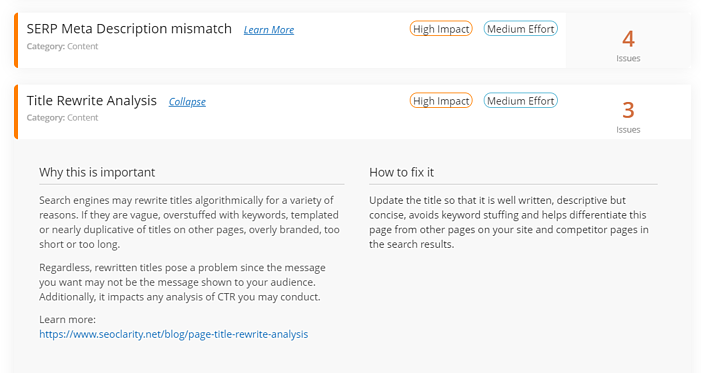 Not an seoClarity Client?

Get free access to our Research Grid data set and tap into the titles and metas we have captured for your web pages across the 330+ million keywords we track on a monthly basis.

Or, contact us to learn how you can load your historical Search Analytics data and get insights quickly.

For the purpose of this analysis I took: 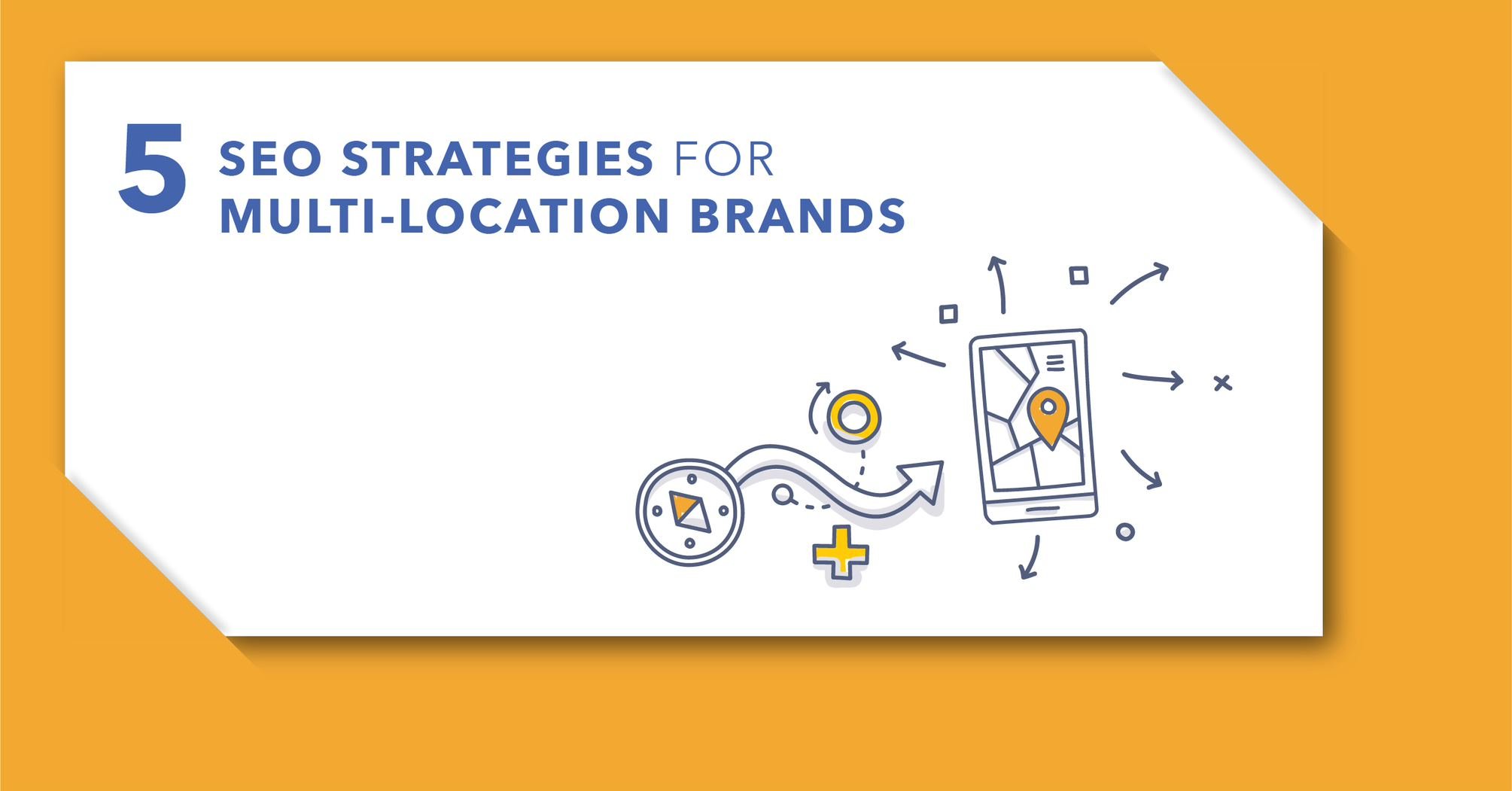 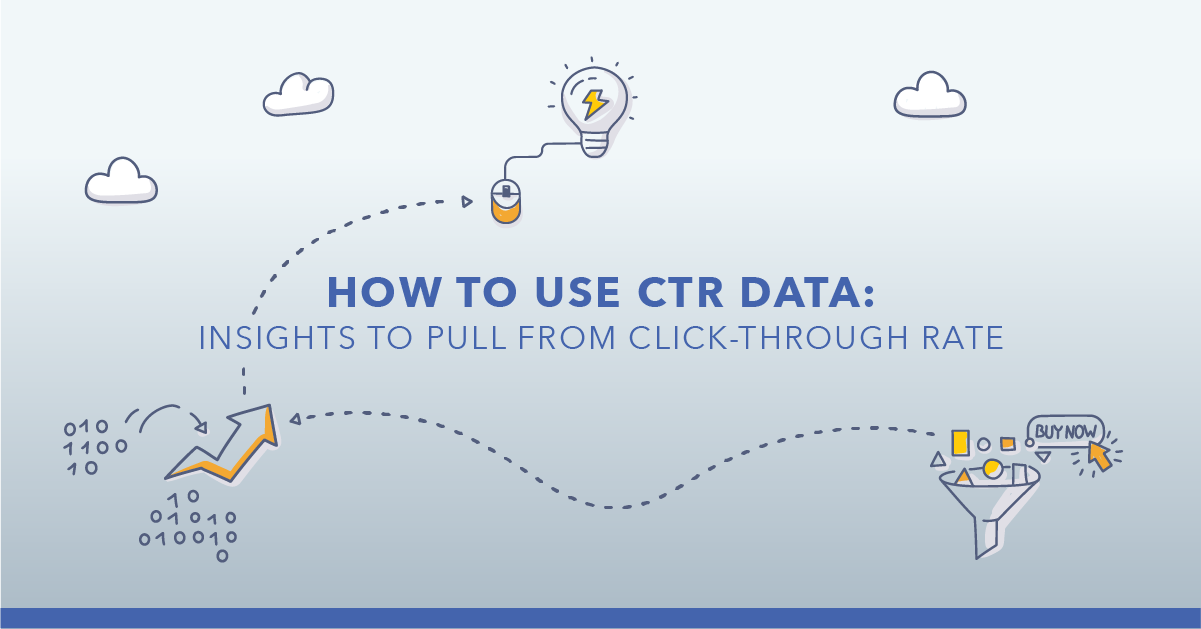