You Can't Beat Google's SERP Features, so Join Them!

Google’s search results page is far from what it used to be, isn’t it?

What once was a simple list of ten-blue links has evolved into a collection of tens of different search result types: Ads, carousels, feature boxes, FAQs and so much more.

Just look at this 5-year time-lapse video of the SERP for the keyword "hotels":

The change is undeniable!

In fact, in our own study, we’ve discovered that there are over 1,200 different and unique features in SERPs. Of course, you don’t see them all at once. Some appear in specific industries or for specific queries only. Nonetheless, that’s a huge number of non-blue-link results that can appear in the search results.

What’s the significance of this? Well, all those additional features affect the ranking positions you’ve grown used to.

In fact, in many cases, the number one spot no longer resides at the top of the page. Sometimes, the result appears below the first (or even the second) fold!

Now, it has to be said that those changes are unavoidable. There is no way that you could avoid having your rankings and search visibility affected by SERP features.

So, what’s left for SEOs to do? My answer - join in. Understand your target SERP and create content that can appear in the SERP featured results.

In this post, I’ll show you exactly how to do this. But first, let’s discuss a question that I am sure you’ve been asking yourself...

Well, I’d love to give a straightforward answer. However, unfortunately, my answer is both YES and NO.

My answer is NO because, as I said above, SERP features are here to stay.

It’s highly unlikely that Google will remove them and go back to just serving the ten-blue links that you could dominate by ranking in high positions and building up the search visibility.

However, my answer is also YES.

I realize that I contradict myself but I have a good argument for that. You see, we can also regain high search visibility because we can aim to appear in the SERP features. That, in turn, is guaranteed to increase our search visibility, and drive further brand exposure in the SERPs.

To understand why I gave both answers, we need to look at the problem from Google's perspective.

You see, Google doesn’t care about what SEOs think. We might be irritated by the changes in the SERP and how our rank results get pushed further and further down. But to the search engine, introducing more SERP features makes sense.

Think about it! Google learns from its users. It constantly analyzes user behavior, searching for the best ways to deliver on its promise to give users the information they need.

It’s no surprise that, to the search engine, SERP features are part of organic search results. This has been confirmed in a tweet by Danny Sullivan earlier this year.

Now, what does that mean to us SEOs?

Well, for one, it means that we need to think in the exact same way as Google, if we want to dominate search visibility and drive our brands’ exposure in SERPs.

Since Google considers feature snippets, popular products, a local pack, top stories, images, videos and hundreds of other SERP features as more valuable to users, then, we need to ensure that our content appears in those too.

In short, we must strive to gain more visibility by having our domains featured in most of the SERP features like images, videos, the answer box, knowledge panel, people also ask, popular products and more.

This way, we’ll no longer have to depend on the ten-blue links but cover the entire SERP universe instead.

There is one other change we have to make to adapt - We must look at ranking positions differently.

Traditionally, we’ve been analyzing rankings based on a domain’s exact position in the organic search results. However, by organic we’ve always meant the ten-blue links. Unfortunately, as you know, this is no longer the case. As a result, rank positions have become a vague metric. They define the place a domain takes in the order of organic links.

However, they do not reveal WHERE it appears on the SERP exactly, and how much visibility it actually has.

Consider this example. Note how for a simple commercial query like "baby dolls", the search engine delivers ads, the local pack, the People Also Ask section, product listings and top stories. As a result, organic search listings have been pushed below the first fold. 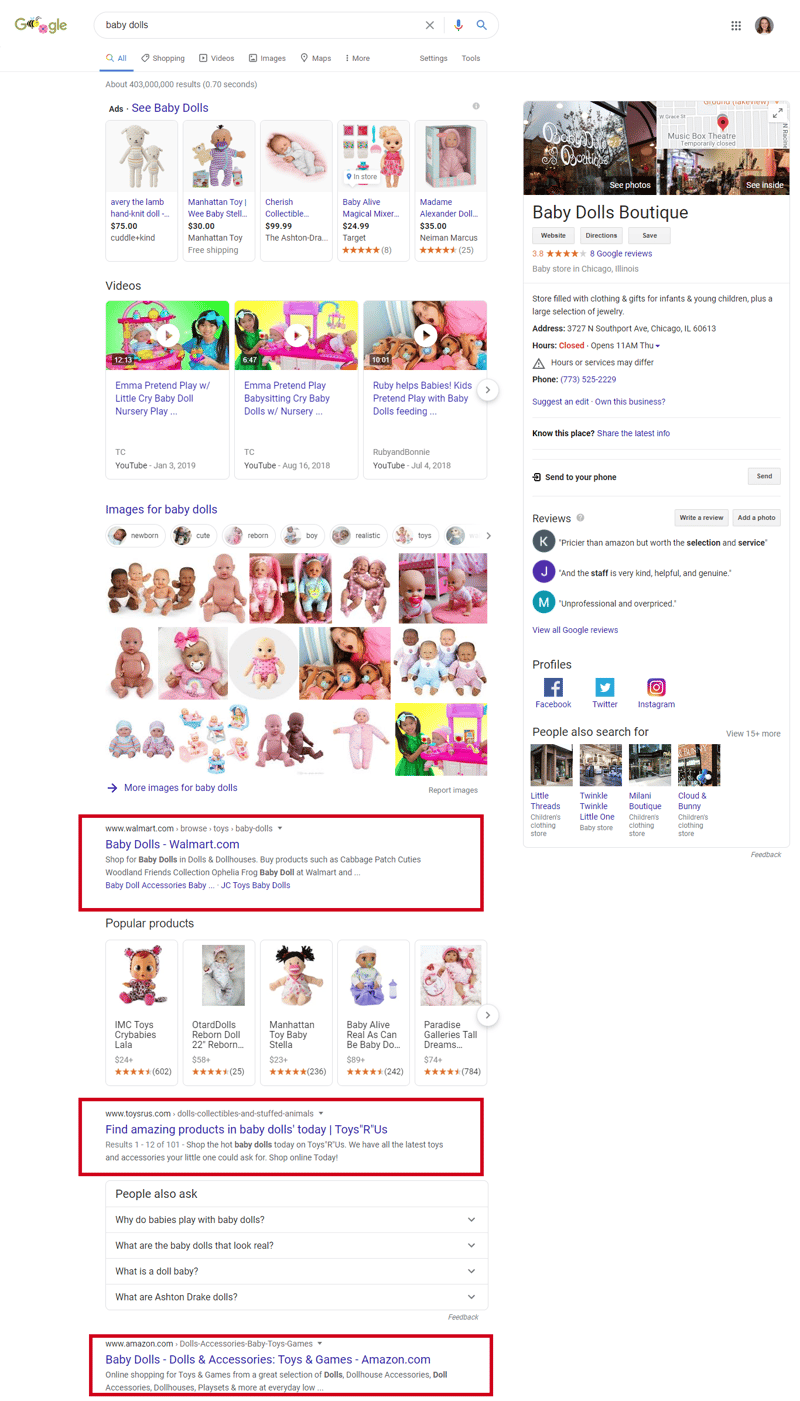 Notice how some of the organic results above include more information than others.

Now, most rank trackers would report on the organic listings order in a similar way. They’d calculate the position the domain has and determine that this is its rank position.

But as you see from the screenshot above, that’s hardly the case.

What’s more, they’d discount another critical factor, the amount of space the listing takes on a page. Because, a listing enriched with Schema (as shown below in a SERP for the term shower trays, for example) is more visible than one with just the basic title and description. 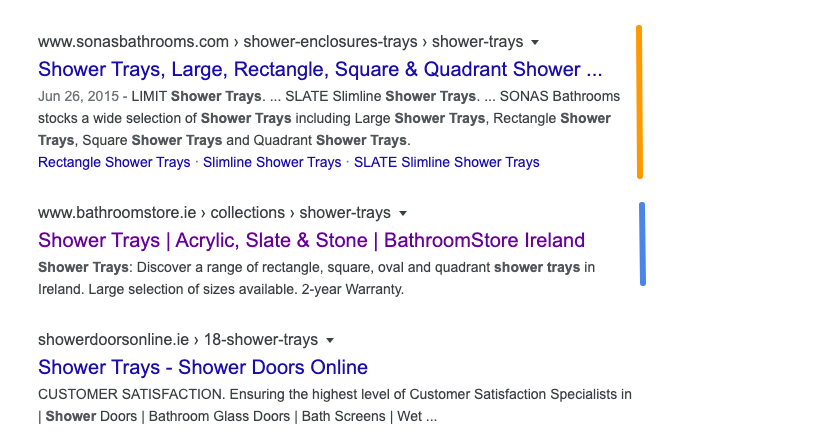 Needless to say, that amount of space the listing takes (including any inclusion in SERP features) makes the domain more visible and increases its click-through rate.

Let’s get back to this issue in a moment, though because there is another important factor we need to consider…

How to Create Content that Can Appear in SERP Features

Let me be upfront about something - there is no single way that can guarantee the inclusion in SERP features. No magic trick or hack exists that can turn your content into an absolutely obvious choice to be featured there.

But, there is a way for you to increase its chances of appearing in SERP features. And that way is identifying and matching the user intent for the query.

#1. Identify Which of Your Keywords Trigger SERP Features

Start by reviewing which of your managed keywords trigger SERP features. You can do this in the platform by accessing our new SERP Feature capability. 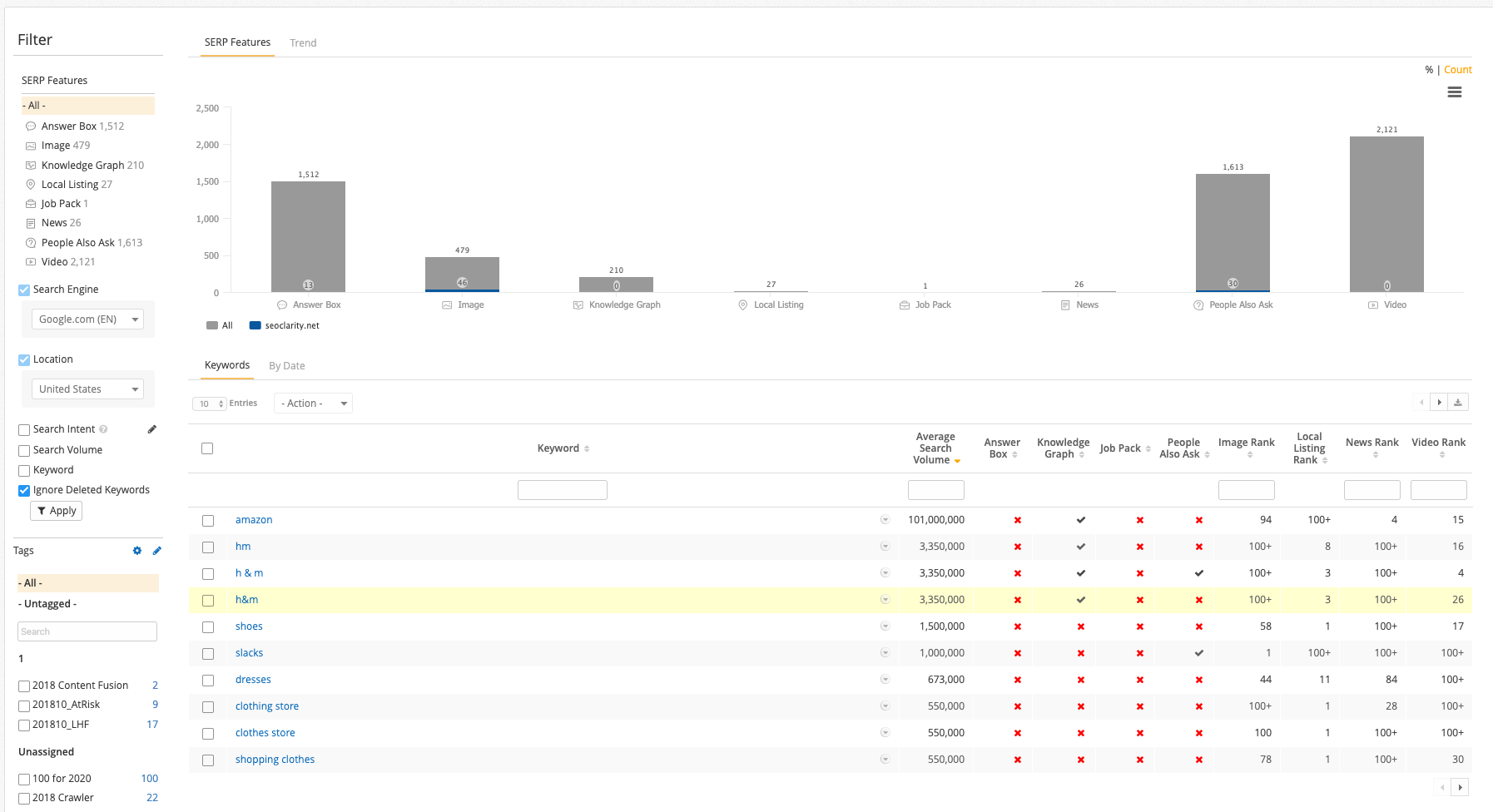 With this data, you can quickly tell which features show up the most for your keyword set.

This will give you the full understanding of the SERP in your space, and what features you need to be targeting. For example, if the majority of keywords show images and videos, then these are the two features that you should start obtaining. If, on the other hand, you see Reviews or FAQ being featured prominently, then, focus on optimizing your content for them first.

The same capability - SERP Feature - allows you to evaluate your domain’s visibility in SERP features. 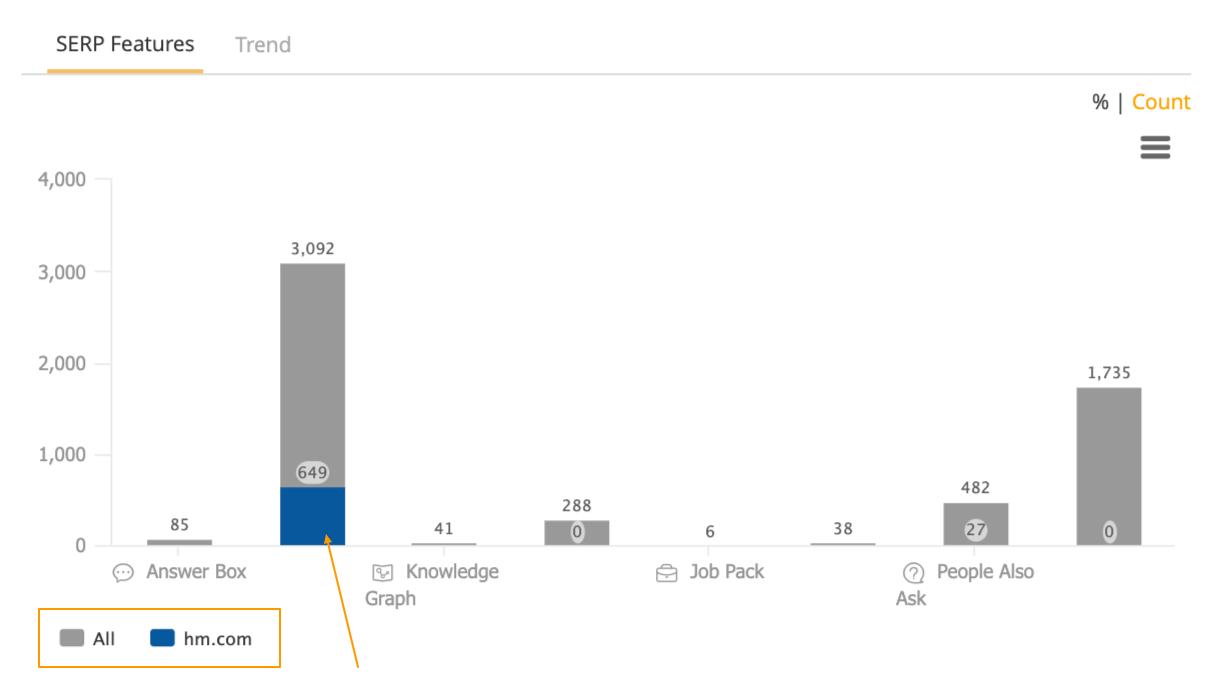 From this report, you can quickly assess which keywords to focus on to drive further brand visibility in the SERP.

With this data, you can start prioritizing keywords that you’ll be working on.

Here are some tips on how to rank in featured snippets. Please note, for the purpose of this guide, I’m only including a high-level overview of the process.

This last point might require some explanation. Remember, your goal is to push existing content into a relevant SERP feature. Doing so will require you to optimize the page for that relevant snippet.

How to Report On Rankings with SERP Features

There is one more problem we must address. It relates to something we’ve begun discussing already - how can we report on ranking positions where the said position no longer determines visibility?

After all, as we’ve established already, your page, in spite of technically ranking on position 1 might appear below the fold. At the same time, another organic listing further down the page might be getting more clicks just because it occupies a larger real estate.

What's an SEO to do?

Well, we’ve been working hard at identifying the best way to report on rankings today, and found the solution in Visibility Share.

Visibility Share replaces monitoring rankings by the domain’s position on the list of organic listings with evaluating how much real estate it takes on the SERPs page.

This allows you to establish the actual effect a particular placement on the page (including the appearance in the SERP features) has on your visibility, and correlates that with other metrics like click-through rate. In doing so, you can gain the fullest picture of your site’s visibility, and also, identify where you should be putting the most effort when it comes to boosting the search visibility.

Mary Kate Mack
Mary Kate is the SEO Content Manager for seoClarity. Her favorite part of the platform is Content Fusion. "As someone who lives and breathes content creation, Content Fusion is the best resource for creating the best content and better search visibility. It's powerful and continues to amaze me!" You can learn more about Mary Kate in her bio video located in the global link.