Disinformation, “fake news”, and fact-checking have become a language staple in recent years.

To understand how Americans feel about the role of social media and search companies, such as Google, we surveyed 1,057 American residents to understand people’s trust in tech companies, where they are most concerned, and their views of developments in the tech space.

Interview with ZDNet on Trusting the Media and Tech

Our Chief Product Architect and Co-Founder, Mitul Gandhi, shared his insights from this study featured on ZDNet.

Here are some of his key takeaways:

To understand the public’s relationship with various tech companies we wanted to see how much trust US residents have in 10 of the nations’ largest tech, social media and search companies. 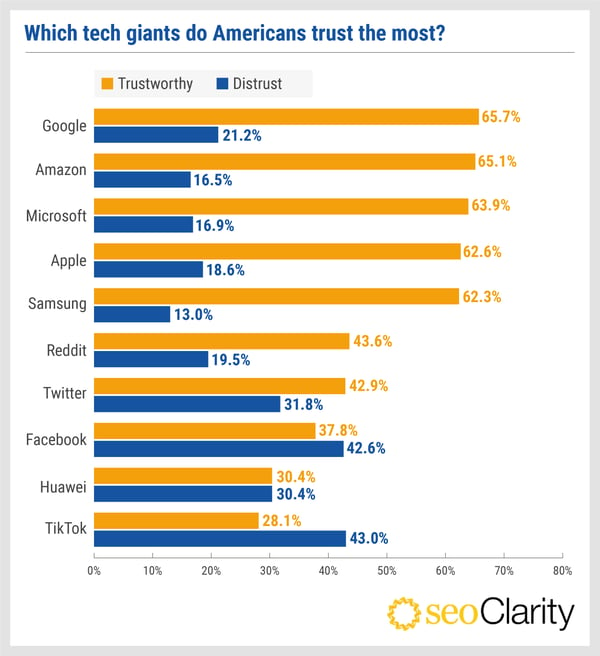 At the other end of the scale, our survey found TikTok to be the least trusted tech and social media brand in the US, with over 2 in 5 (43%) Americans saying they distrusted the video social media app.

Somewhat surprisingly, when we consider the current political climate and discussions around Huawei and TikTok, the second most distrusted company on the list was Facebook. 42.6% of respondents saying they distrusted Mark Zuckerberg’s social media giant. Some users chose to state that they were unsure of their trust levels of certain businesses. 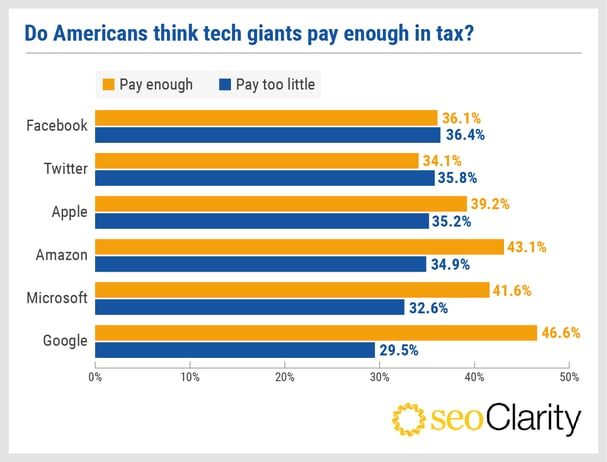 Across the board, fewer than half of Americans believe the likes of Google, Microsoft, Amazon, Apple and Facebook, pay their fair share in taxes; with close to a third (34%) saying they believe these tech giants do not pay enough.

In addition to the distrust many Americans already feel towards Facebook, the results of our survey found more than a third (36.4%) believe Zuckerberg’s corporation doesn’t pay its fair share in taxes - at both a state and federal level - with just 36.1% saying they do pay enough.

Similarly, just 34.1% of Americans believe Twitter pays enough in taxes, with 35.8% expressing that they do not. Meanwhile, Google, the most trusted of the companies, is believed to pay its fair share of taxes by 46.6% of Americans; while fewer than 30% (29.5%) say Google does not.

With much being spoken about in the media around ‘fake news’ and other online threats, such as hacking and scams, we asked respondents whether they thought enough had been done by politicians to rein in tech firms and protect users online. 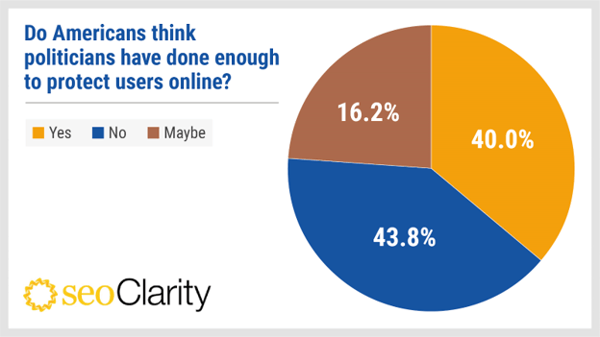 Our results found that just 40% of Americans believe politicians and regulators have done enough to protect them online, however, this decreases to less than a third (32.3%) of Americans aged under 25; indicating that younger (tech-savvy) Americans are statistically more concerned with the current state of online regulations. 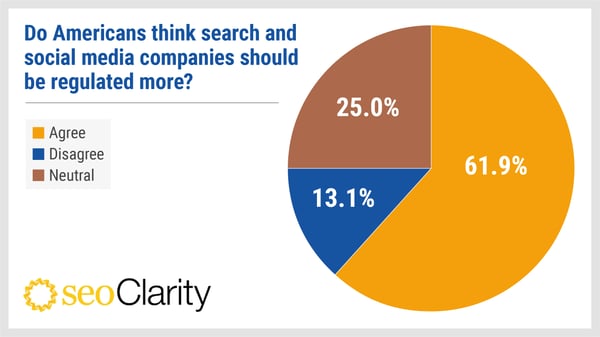 The results of our survey found that nearly 62% of Americans believe that social media and search companies (such as Google, Facebook and Twitter) should have more regulations imposed on them.

This appears to be a bi-partisan viewpoint with 63% of Democrat and Republican respondents expressing a need for great regulation on such tech companies. Between the age groups, 70% of over 60’s believe more regulations are needed, compared with 59.7% of those between 25 and 40 (Millennials).

*Those that answered ‘not sure’ or did not believe in regulation were removed from the results.

When it comes to who should regulate tech and online companies, 30% of Americans believe independent bodies of experts are needed to regulate social media, search and other tech companies. This would be different from the current regulators that include the FTC, the executive, and state and house legislatures.

The second most popular way for online companies to be regulated would be by the companies themselves, in effect forming an industry run regulator, with in-depth knowledge of each platform and experts in the industry. 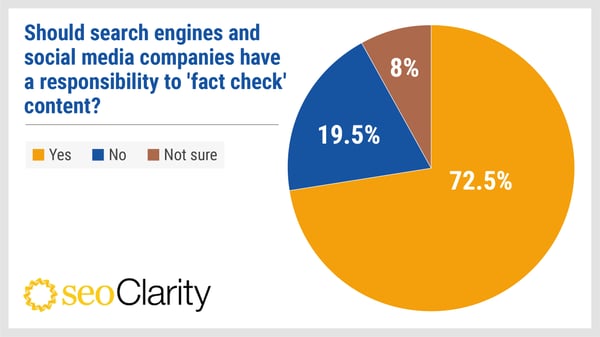 In the run up to the 2020 election, Twitter rolled out it’s fact-checking feature and disputed statement notifications, including a number of high-profile fact-checks on then-President Trump’s account. This addition according to our survey, is something 72.5% of Americans want social media and search companies to do, rising to over three quarters (76.2%) of under 25s. 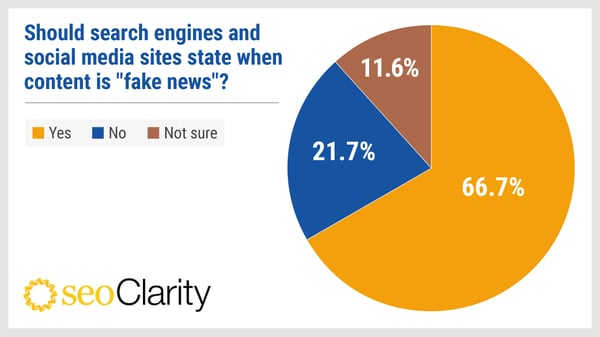 In addition to fact-checking the content featured on their sites, two thirds (66.7%) of Americans believe search engines and social media sites should explicitly state links and articles that are found to be “fake news”; rising to almost three quarters (74.9%) of under 25s.

The results of our survey found, politically, the notification of ‘fake news’ is a divisive one. While 76.2% of Democrat supporting respondents said sites should state when a link or article is fake, just 57.6% of those that described themselves as Republicans said the same.

Whilst “fake news” can be debated and shows clear signs of partisanship, the vast majority (79%) of Americans surveyed said social media media and search engines have a responsibility to protect users from illegal and/or unsafe websites.

When surveyed about their trust in the results they see on Google searches, 1 in 5 (21.4%) Americans said they “almost always” trust the results that appear. 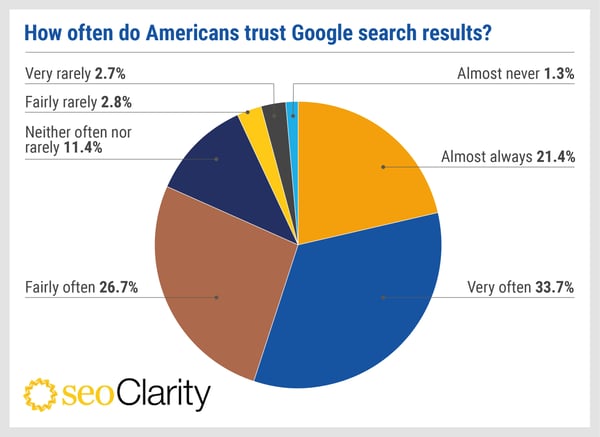 In all, 81.8% of Americans say they mostly trust the results they see on Google, with just 6.9% saying don’t. However, our results showed that respondents over the age of 60 are twice as likely to distrust the results on Google (14.8%) than the national average.

With nearly 82% of people trusting what Google tells them, we took this one step further, to see if Americans think their health questions have been vetted by a medical professional. 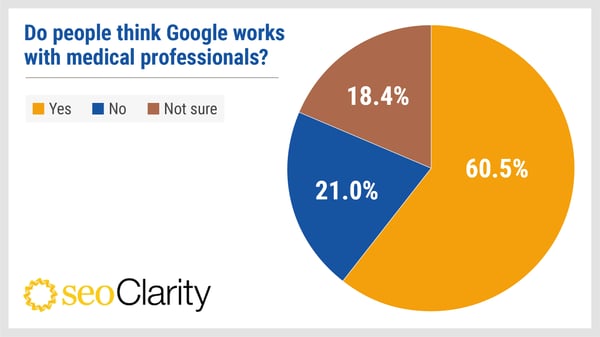 Whilst this may be the case for some websites out there, ultimately, content can be present and shown by Google for medical search queries without any form of medical professional review.

The search engine does prioritize content from places like the CDC, as shown when you google ‘COVID-19 symptoms’, but this does not mean that all medical content has been seen by anyone with a medical background, indicating that the public could be trusting the medical answers online somewhat blindly. 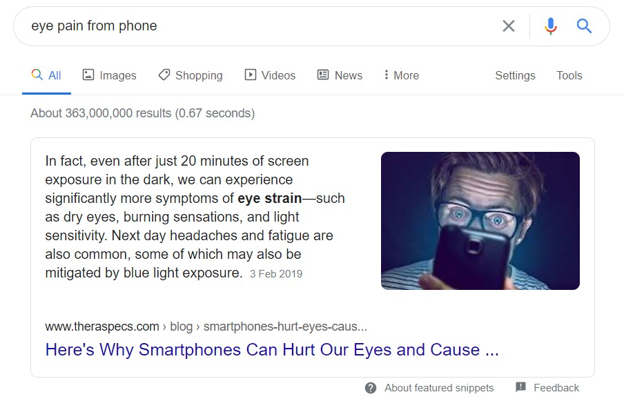 50% believe websites can control where their site appears on Google

When it comes to search results, nearly half (49.7%) of Americans surveyed said they believed websites have total control of where their site appears on Google searches. However, this isn’t the case. Whilst advertising and other marketing disciplines, such as Search Engine Optimization (SEO), are used to improve the chances of being seen high on Google rankings, this success can be impacted by a range of “ranking factors”. 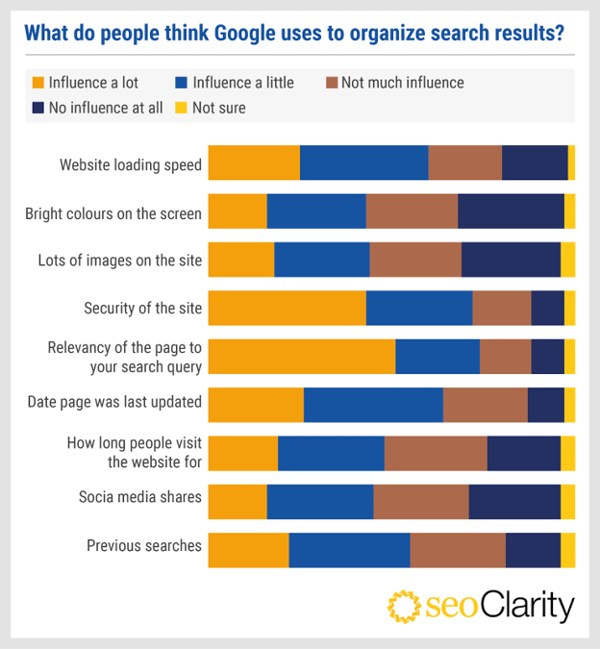 When asked about the ‘ranking factors’ that can impact where a website is seen on Google, 68% of respondents said “bright colors” on the screen had at least some impact, with 88% saying that the security and relevancy to a site would help in rankings of a website. The top three factors users felt had the most impact (‘influenced a lot’) on a site ranking well in Google search results were:

From using the SEO community’s knowledge and Google’s own guidelines on what they look for in a website, some of the public’s knowledge is certainly not wrong, but some is far from how the search engine works.

For example, almost 2 in 5 say they don’t think previous searches have much influence on search results, but this could not be further from the truth. Google serves personalized results as much as possible and that will include sites it knows you love or have visited before.

29% think Google is not clear when showing advertisements

While the organic rankings of a site can be impacted by various factors, adverts on Google are a more prominent feature of a search results page. However, despite Google adding ‘AD’ icons to advert listings on search pages, almost 1 in 3 (28.9%) do not think Google is clear and transparent when showing you an advertisement, while 61% said that they thought the search giant was fair in its advertising practices.

Despite Google being the most trusted tech firm we surveyed people about, 69% of respondents said they are concerned by the data collected by the search engine. 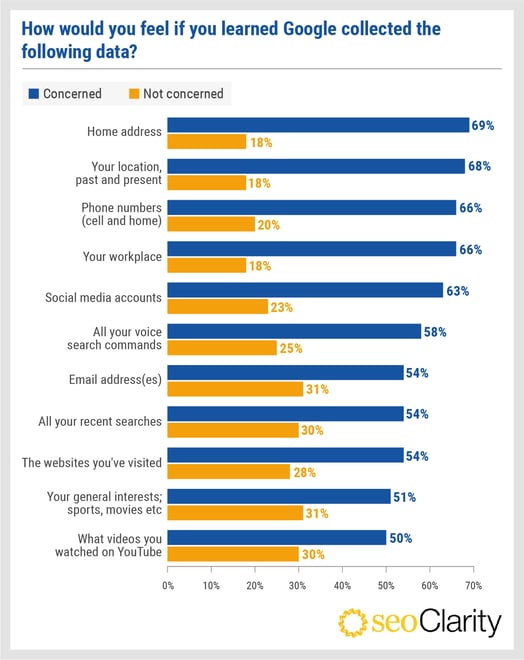 In the results of our survey, we found that up to 69% of respondents were concerned by the data Google has been known or is predicted to be harvesting and collecting when people use their services.

The results found that 54% are concerned with their email addresses being harvested, whilst 69% feel uneasy about the tech firm being able to locate their home address, whilst 58% are concerned by Google's various voice activated products and services listening in on their conversations, even when not in operation.

However, despite these concerns, 57.9% of people believe Google has the users best interests at heart and 80% believe the world is a more knowledgeable place because of their services and products.

The tech, social media and search industry is ever evolving and many of the companies have started to diversify and expand their products and services into home and wearable gadgets, and even driverless cars.

Our survey found that 75% trust their smart speaker to be accurate and correct the majority of the time, with 60% believing answers given by Google home assistants and speakers come from Google owned databases of knowledge, rather than ranking websites and content partners.

This belief that answers come from Google owned databases, goes some way to helping explain how 47% of respondents believe that answers given by smart speakers are verified by a human, rather than an AI. 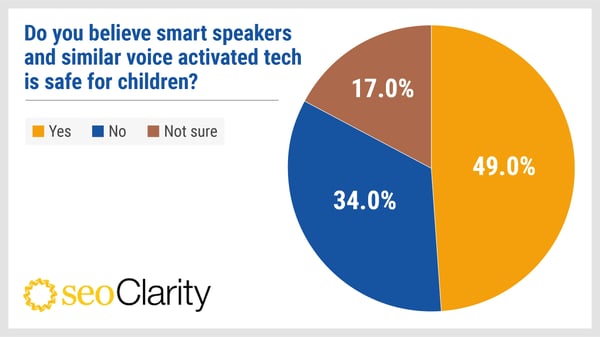 The greater ease and access to data and information via smart speakers presents a potential range issues for child safety and for just over third (34%) of Americans, this is real fear; with respondents under the age of 21 almost twice (62.9%) as likely to say smart speakers aren’t safe for children than the national average.

3 in 4 concerned about data gathered by wearable tech

In addition to the safety concerns of children and smart speakers, 74.8% of respondents said they are concerned by the potential gathering of health data via smart watches and other wearable tech. 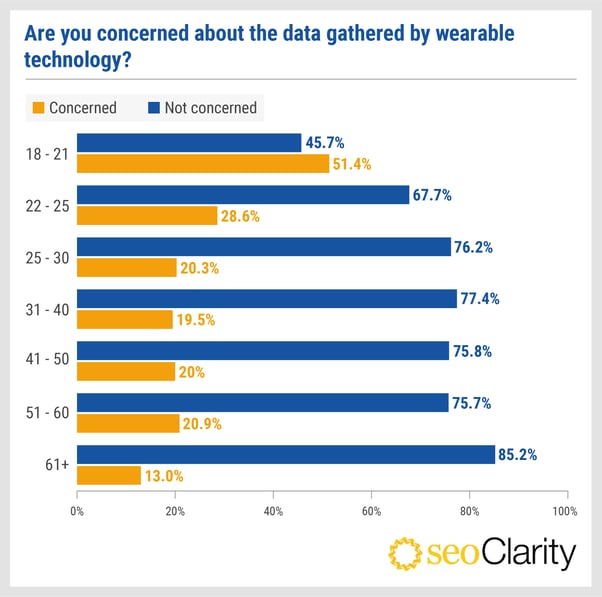 57% of Americans would trust a driverless car

Wearable tech and home speakers/assistants aren’t the only areas companies, such as Google, are looking to expand into; cars and other automotives are also in their sights. 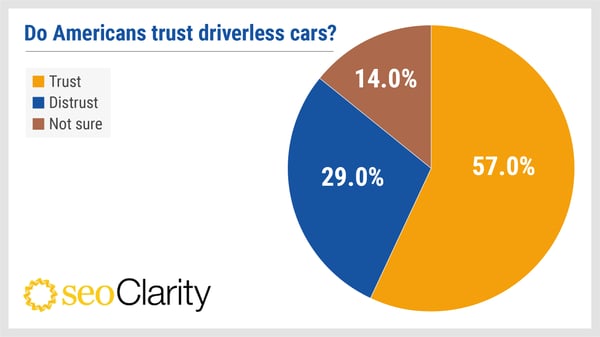 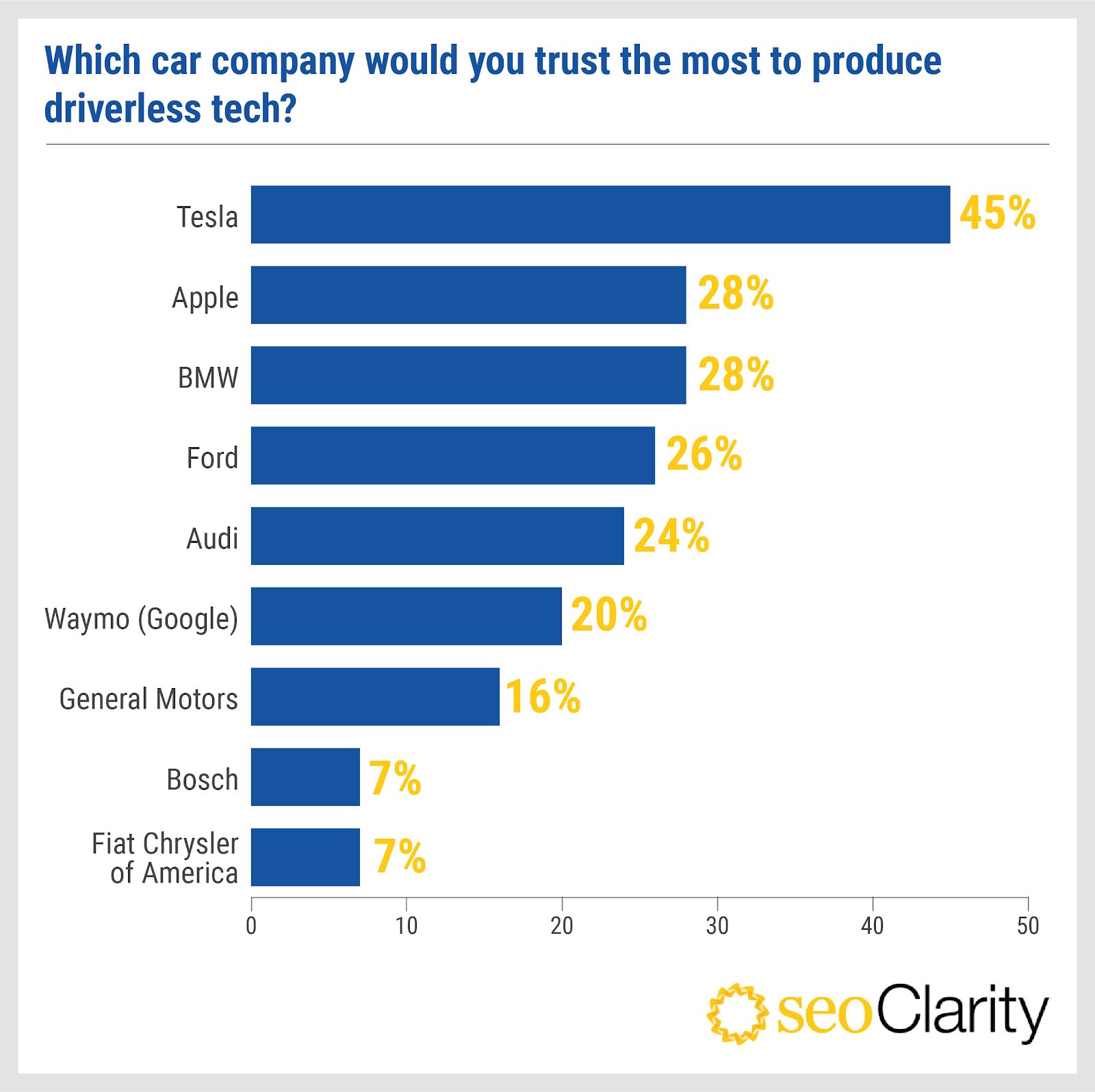 The survey was taken by a representative sample of 1,057 people living in the United States. Results were fielded from the 19th to 23rd November 2020 using Amazon’s survey platform: Mechanical Turk. The respondents breakdown was as follows: 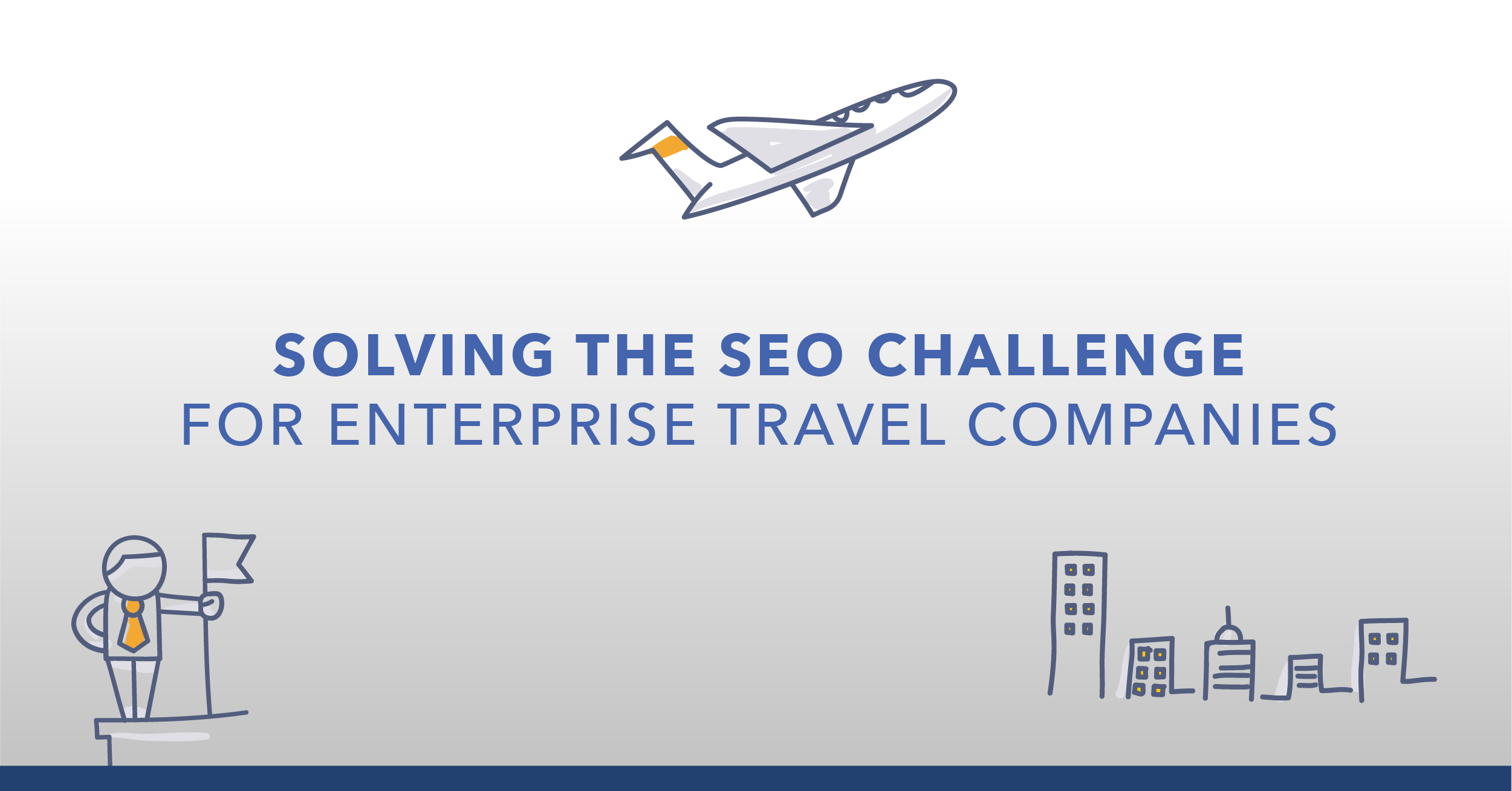 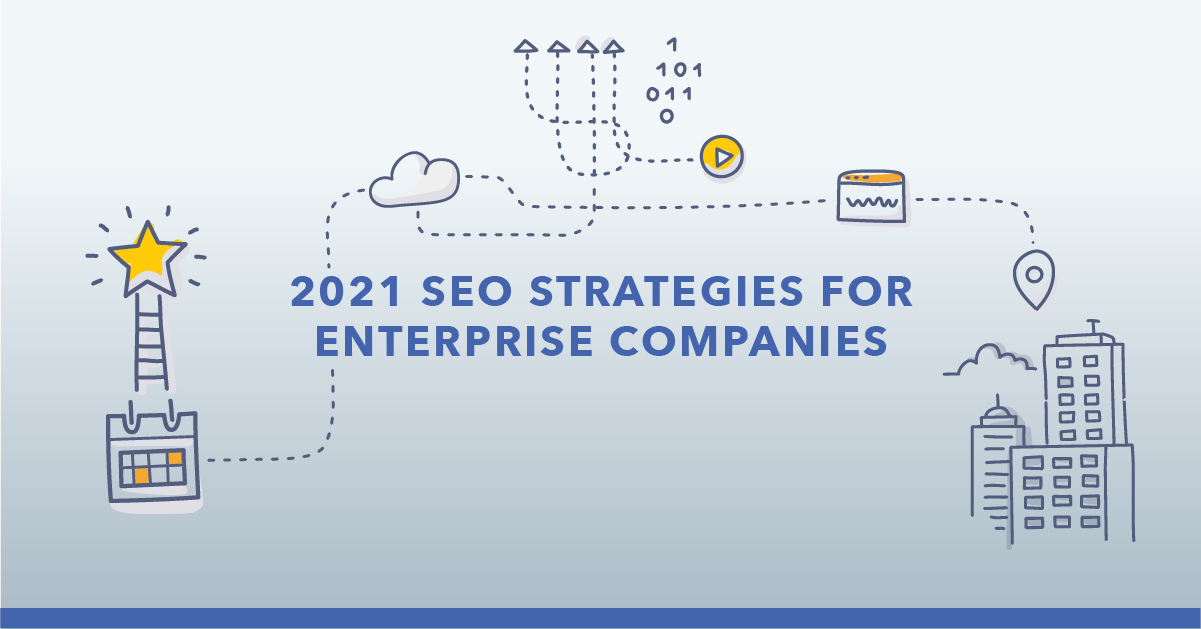