Check back here for the latest developing news around Mobilegeddon! We will update as we receive new data. 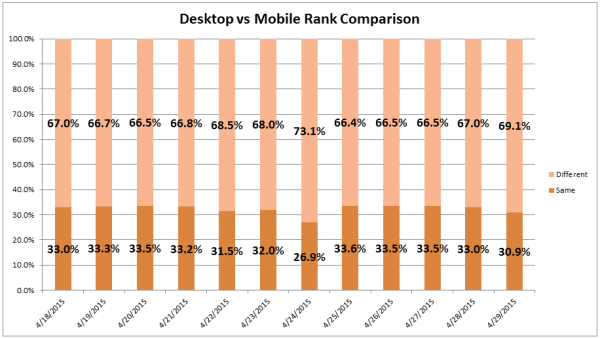 It has been over a week since Google's mobile algorithm change started rolling out, and the resulting turbulence was less impressive than many speculated -- with the effect that was more like ripples in the kiddie pool than tidal waves.

Why is this? Why was there such an industry-wide panic leading up to this change? And why haven't we seen a corresponding, monumental shift as a result?

As we mentioned in an earlier blog post, Google has been showing preferential treatment of mobile-friendly sites since it started displaying the "Mobile-Friendly" tag on search results in mobile SERPs in November. So, it's likely that the biggest shifts have already occurred gradually over the past 6 months. The fact that Google was so candid in its initial announcement about the details around the change as well as giving a deadline was really remarkable.

Additionally, it's very likely that sites have been taking mobile a lot more seriously leading up to Mobilegeddon.

In this table, you'll note that mobile-friendly sites have gained a great deal of ranking increases into the Top 3 results in Google's mobile SERP in the past 7 days.

In a few cases, you can see that the change was merely a trade-off of mobile ranking to the mobile versions of sites, like Staples.com, Huffingtonpost.com, and pcmag.com. However, there are mobile sites that actually lost ranking in the Top 3 results in Google's mobile SERP at the same time.

How is this possible? We will continue to dig into the data to see exactly what happened, but Keith Goode, the Chief SEO Evangelist at seoClarity, speculates that:

"It's possible that, for those mobile-friendly sites that actually lost ranking in this algorithm change, their competitors either finally came online with a mobile presence with an 11th-hour solution, or Google finally recognized their mobile presences with this algo change. The result was an improvement in rank for those competitors, and a loss in rank for the previously-ranking sites."

We will continue to monitor rankings and let you know if anything changes.

Day 4 of Mobilegeddon: Biggest change so far. 5.1% variance day-over-day. Since the mobile-friendly change was rolled out, there has been a total of 6.6% variation between desktop and mobile SERP results.

This morning, during his Google+ hangout, Google's John Mueller indicated that the mobile changes have been completely rolled out in some data centers. And we're starting to see a more dramatic variation between Google's mobile results and their desktop SERPs. Overnight, we've seen a 5.1% increase in the number of different results between those two SERP types. That brings the total difference from April 20th, the day before the change, to 6.6%.

Has your site been affected ... positively or negatively? We'd love to hear from you in the comments.

Day 3 of Mobilegeddon shows a slight leveling in the disparity between desktop and mobile ranking. In the 50,000 queries we ran, there seems to be a 0.5% correction as of 23 April 2015.

Here we are at Day 3 of Google's Mobile Algorithm change, and the world still appears to be intact. Of the 50,000 keywords we have analyzed and the associated 60,000 domains appearing in the Top 10 results in Google's desktop and mobile SERPs, April 23rd actually appears to show a 0.5% change in the opposite direction.

The overall "non-impact" of this change has many in the search industry wondering, "Is this it?" Of course, we'll continue to monitor the SERPs and will update here accordingly, but we caution against complacency. There are a couple of potential reasons for the lack of deep impact: 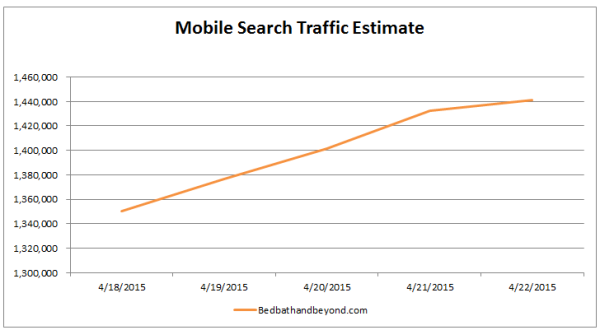 Based on the 50,000 keyword set we analyzed, sites like BedBathandBeyond.com might see a notable improvement in traffic due to their ranking improvements. 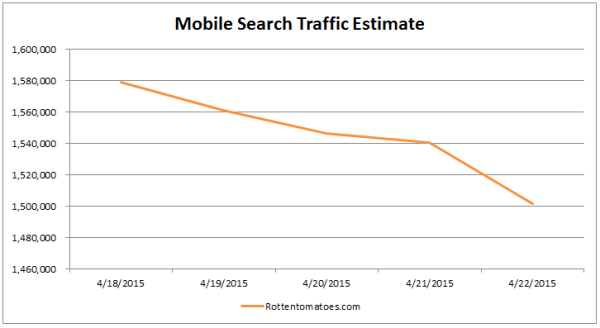 Sites that have see ranking declines over the past few days, such as RottenTomatoes.com, could see a notable decrease in traffic.

Check back here regularly for more updates as we gather more data around Mobilegeddon 2015.

This chart shows the difference between domains appearing in the top 10 results in Google's desktop SERP vs Google's mobile SERP over the past five days. 4/22 data shows a ~2% change.

For Day 2 of this mobile algorithm change, we have started to see a shift in the Top 10 results in Google's mobile SERP as compared to the desktop SERP. The difference between site visibility in mobile vs. desktop has shifted 1.7% for the 60,000 domains appearing in the Top 10 results for 50,000 keyword searches.

As Google continues to roll out this change, we may see even more dramatic differences in the coming days and weeks.

Have you seen a change in your mobile rankings yet? Let us know in the comments below.

This chart shows the difference between domains appearing in the top 10 results in Google’s desktop SERP vs Google’s mobile SERP over the past four days.

The tension in the search industry has mounted higher each day since Google announced that mobile-friendly sites would have a distinct advantage over mobile-unfriendly sites starting on April 21st. Industry blogs have been abuzz with speculation as to how big this change would be.

When April 21st rolled around, reaction was also mixed, but many SEOs were calling it a "boring, non-event."

What Does the Data Say?

seoClarity has been tracking the ranking data in the top 10 results in Google for 50,000 keywords and over 60,000 domains in the e-commerce segment since before the mobile algorithm update, and we ran those numbers again early this morning to see if there were any statistically significant changes.

The data says: No. There is no significant change.

Why hasn’t it changed? How can this be? Well, Google released a statement on their blog stating that the rollout would be gradual and that webmasters might not notice a difference at first. We suggest that there are three potential reasons we haven’t see a significant change:

Check back here tomorrow and later this week as we continue to measure the ranking impact of Google’s Mobilegeddon.

For information on how to see seoClarity in action click here.

Ryan Heuser
Ryan, affectionately known as the Data Doctor, has been with seoClarity since 2012 and currently serves as the Technical Services & Product Manager. In this role, he facilitates new platform features, produces analytical research data and employs the platform to provide consultative insights. He's a Midwest boy at heart and enjoys bourbon as much as he does Chicago sports and food. Prior to seoClarity, Ryan flexed his intellectual prowess by achieving his MBA in Marketing & Management from Concordia University Wisconsin (Go Falcons!) in 2011. 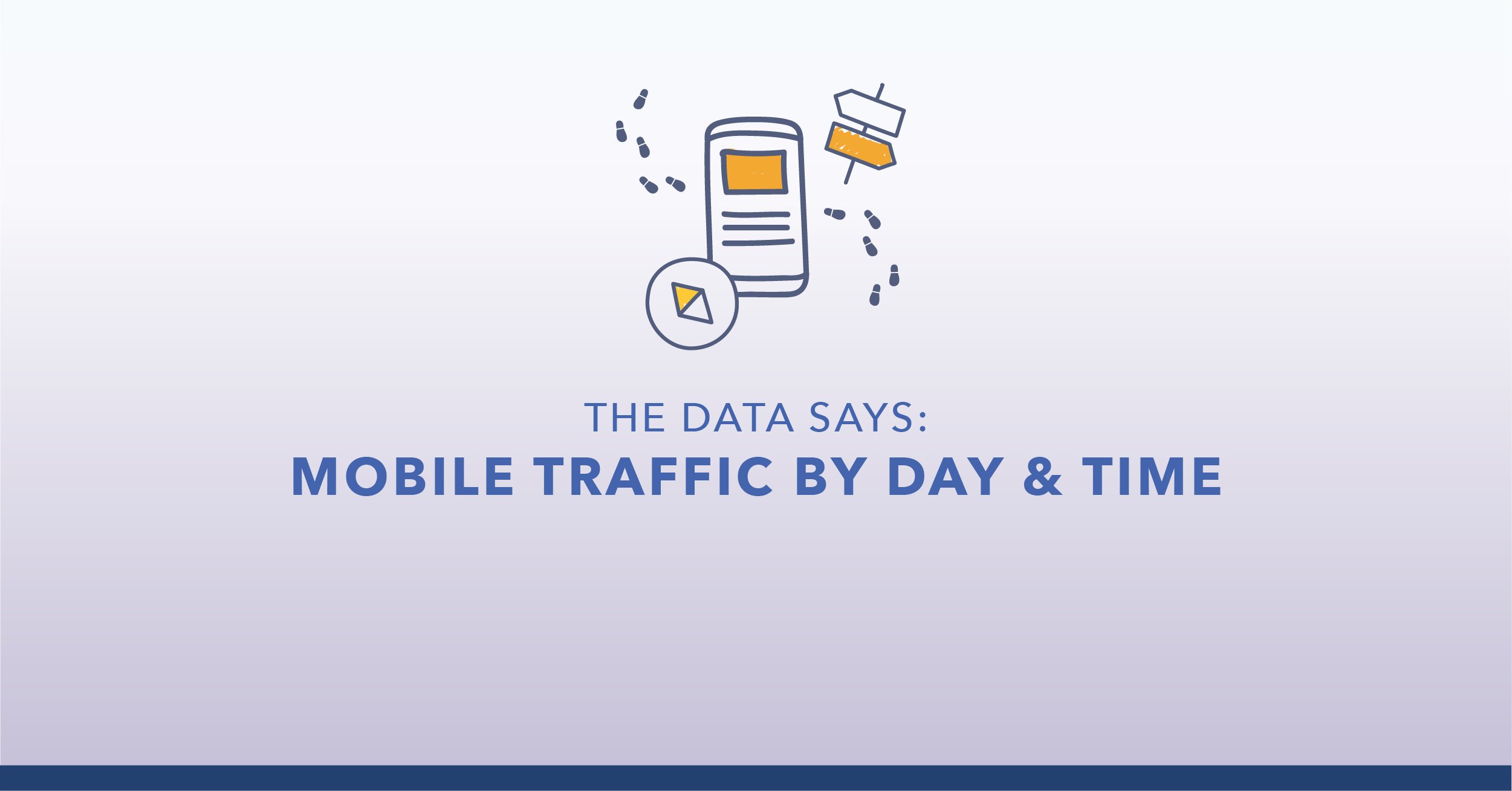 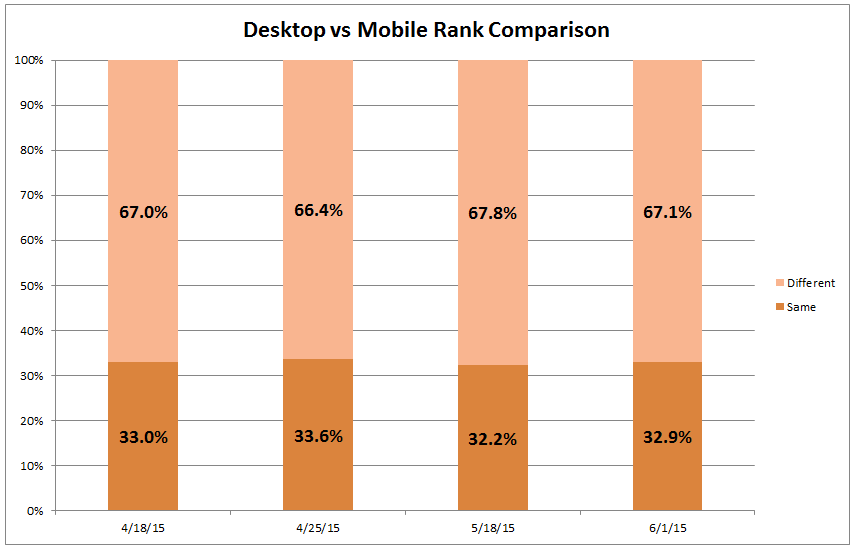